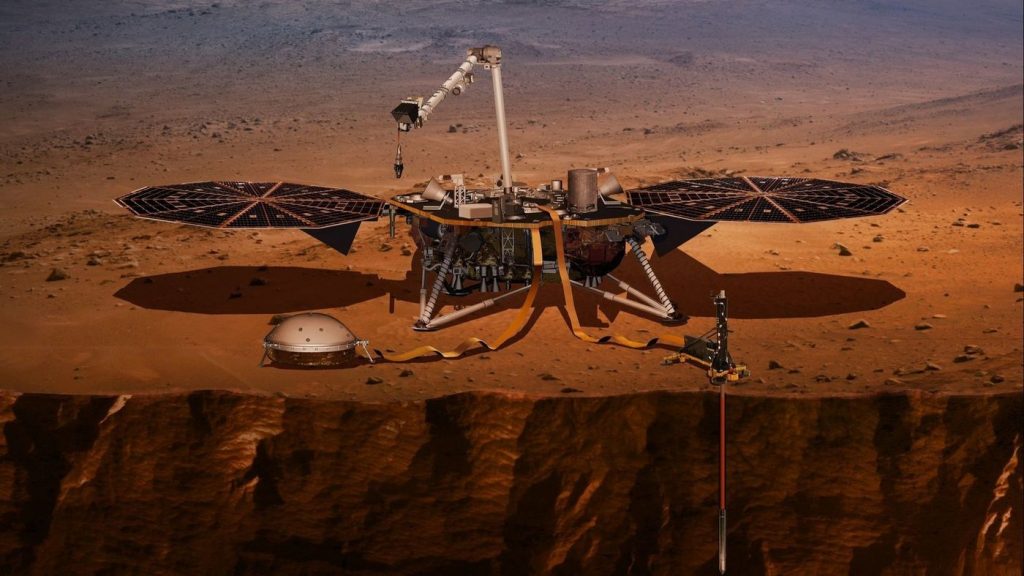 Spectrum Makes Its Mark on Mars

On 26 November 2018 the NASA Mars InSight spacecraft started its dramatic descent toward the Martian surface. After separating from the cruise stage it entered the upper Martian atmosphere at a height of 80 miles and a speed of 12,300 mph (5.5 kilometers per second). As it slowed down during its descent the probe’s protective aeroshell reached temperatures of 2,700°F (1,500°C). At an altitude of 36,500 feet (11 km) and a speed of 861 mph its parachute deployed, slowing it to 134 mph before it fired its landing rockets at a height of 3.600 feet (1.1km) to land at a gentle 5 mph (2 m/s). At approximately 19:53 UTC, mission control received a signal that the spacecraft had successfully touched down at Elysium Planitia.

Spectrum supplied Lockheed Martin Space in Denver, CO with a fully automated Nova 820 UV laser wire marking system in 2014. This is used in the initial stages of electrical harness production to laser mark, measure and cut wires to length. Apart from using the equipment for the InSight program, Lockheed utilise the equipment for many other different programs including the wiring produced for the Kennedy Space Center for the Orion program.

The Nova 800 product range was specifically designed for complex aerospace wire harness manufacturing applications. Since the company was founded in 1989 Spectrum has supplied almost 1000 laser wire marking systems to over 50 countries, making it unquestionably the world market leader in the development, manufacture and supply of UV laser wire marking equipment. The company has supplied all of the biggest names in commercial and military aerospace worldwide. In late 2016 Spectrum introduced the new updated 6th generation Nova 800i series laser wire markers.

InSight (Interior Exploration using Seismic Investigations, Geodesy and Heat Transport) is NASA’s latest Mars lander which is designed to explore the deep interior of Mars. Lockheed Martin is the InSight prime contractor responsible for the complete spacecraft system. Following landing, the mission will survey the surrounding area and deploy the mission critical instruments. It will then begin its mission of observing Mars, which is planned to last for two years.

Dr. Peter Dickinson, CEO at Spectrum, said: “We may only have played a small part in this interplanetary project but I and all the team at Spectrum are exceptionally proud and excited to be associated with the Mars Insight program. InSight is truly leading edge and we look forward with anticipation to seeing what new knowledge it turns up while it explores Mars and its deep interior.”

The company is also pleased to announce that it will be celebrating its 30th anniversary in October 2019. Please see our web site for further information on this milestone achievement throughout 2019.